Vietnam, in the eyes of foreigners who know the country well, is a nation that loves to party and celebrate whatever the occasion. Not only observing traditional rituals and festivities deeply ingrained in the psyche of the Vietnamese, but increasingly, society is turning its attention to other global occasions, which have now found places in Vietnam’s heart.

Unlike its southeast Asian neighbors, such as Laos, Thailand, Myanmar etc. it can be said that Vietnam is not a traditional Buddhist country, with around just 12% of the population classing themselves as Buddhists. In fact, over 70% of Vietnam’s population follows a variety of folk religions and animism (the latter is a belief in good and evil spirts), while a very small proportion follow Protestantism and Caodaism. Catholicism has long been an important religion, dating back to the Jesuit missions of the 16th and 17th centuries. Nowadays, the Catholic Church boasts around 5,658,000 followers representing 6% of the population. Not only do ardent Catholic worshippers celebrate Christmas, but so too does anyone with a love and zest for life. During the Christmas and New Year period, Hanoi dons its Christmas guise as the streets come alive with the spirit and symbols of this time of year.

Christmas, and by default the Gregorian New Year are examples of festivities traditionally not part of Vietnamese society but which are now firm fixtures in the annual calendar. Twenty or so years ago, Father Christmas (affectionately known as ‘Ông già Noel in Vietnamese – ‘old man Christmas’), Christmas decorations and the like were uncommon sights. However, gradually these symbols established their place in the celebrations queue. Now it is almost impossible to imagine Vietnam without Christmas and the New Year that follows. 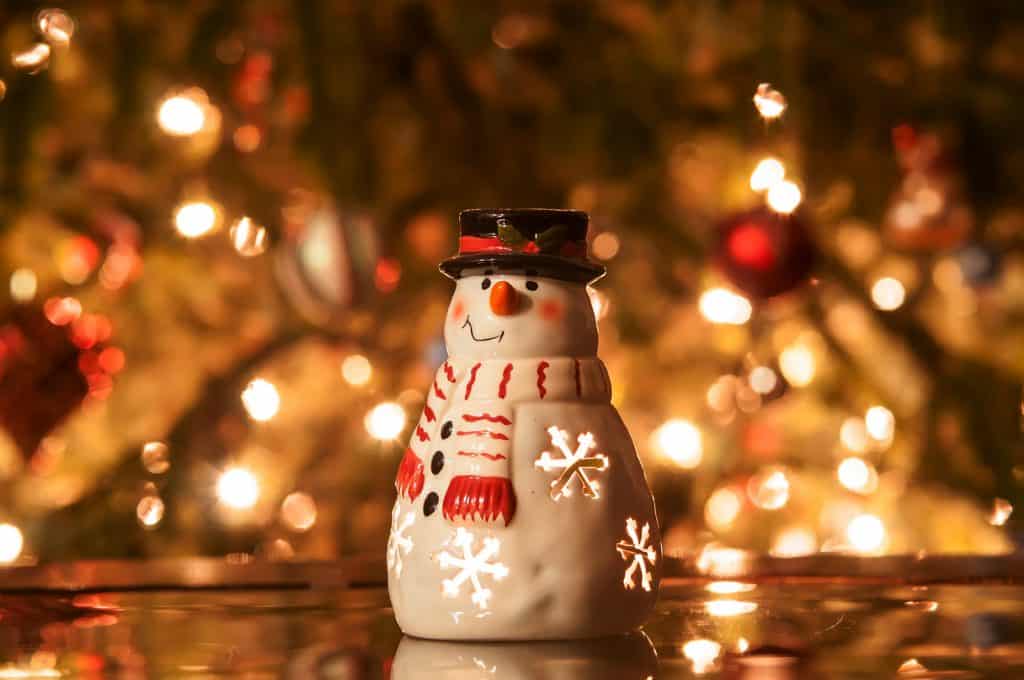 As a British person living in Hanoi for many years, I have witnessed the progressive adoption by Vietnamese society of this festive season. Come with me on a whistle stop tour of a few ways to celebrate Christmas like a local Hanoian.

Hanoi is home to a number of Catholic Churches, three of the most iconic being St Joseph’s Cathedral in the center by Hoan Kiem Lake, Cua Bac (North Gate) Church along Phan Dinh Phuong and Ham Long Church south of Hoan Kiem Lake. These, and many others dotted around the city, resemble any other western Christian church. Featuring nativity scenes, candles and Christmas lights, they are packed to the hilt on Christmas Eve with worshippers spilling onto the steps, celebrating midnight mass. 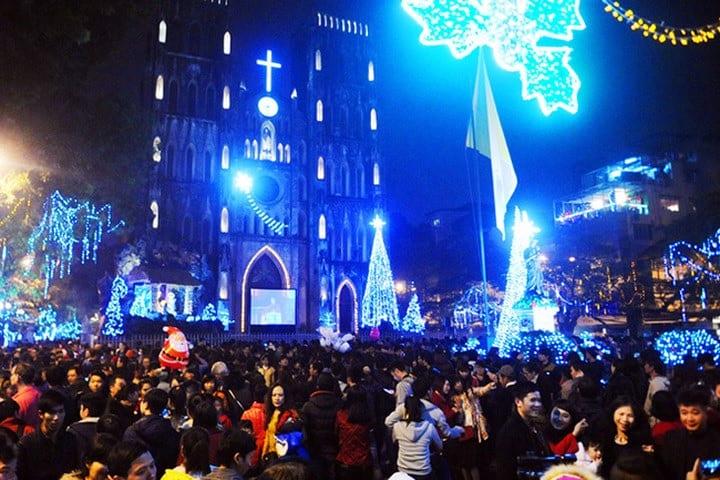 For those who like music and entertainment, one does not have to go far to enjoy free concerts that spring up around the city. Classical music and jazz performances take place outside the opera house and in public squares. Major 4 and 5 star hotels lay on Christmas entertainment and sumptuous feasts, while many international organizations hold staff Christmas parties. Around Hoan Kiem Lake and on street corners, stages spring up featuring live music performances as a competing cacophony of sounds fill the Hanoi air.

Father Christmas and his entourage are all pervasive in the old quarter stalls and shops crammed to the hilt with Santa Clause hats, reindeer antlers, and jingle bells, tinsel in a myriad of colors, cotton wool snow, fake Christmas trees and glittering baubles. Children and teenagers sport Christmas hats, while Father Christmas often makes his presence known in local restaurants and street parades. Shopping malls, such as Trang Tien Plaza, Vincom Mega malls at Time City and Royal City and Aeon Mall, are perfect Christmas hangouts for people watching at this time of year, as well as a chance to snap up festive season sales and great offers. Outside the entrances are huge displays of snowmen, Christmas presents, fake snow and Christmas wishes sponsored by major banks and other organizations are surrounded by Vietnamese taking selfies and group shots with families and friends – eager to capture themselves in a part of Christmas.

The streets become more jam packed than normal, from Christmas Eve through to New Year’s Day, as nowadays Christmas is one of the most important festivals in the Vietnamese calendar.
While the Christmas period is not a public holiday, 1 January is often a day off for many businesses and with New Year’s Eve following a traditional western format with a Vietnamese twist. Major cities like Hanoi, Hai Phong, Da Nang, Saigon etc. play host to hundreds of thousands of gatherers seeing in the New Year at countdown parties, sponsored by the likes of Heineken and Tiger Beer – usually blaring out EMD (Electronic Dance Music), popular with today’s young generation.

Around Hoan Kiem Lake as midnight strikes, the dulcet tones of Abba’s iconic ‘Happy New Year’ fills the air – a twenty-year plus tradition, and long may Abba’s new wishes continue for years to come.

So, we say in Vietnamese, chúc mừng Giáng Sinh (happy Christmas) and chúc mừng năm mới (happy New Year) as we wish you happy end to 2017 and a prosperous 2018.