A well-known global word is a loan word from Japan, where this phenomenon was invented. Karaoke combines ‘kara’ from the Japanese word ‘Karappo’ meaning empty and ‘oke’ the short version of ‘okesutora’ for orchestra.  The term ’empty orchestra’ was conceived by a Japanese entertainment group that resorted to playing orchestral music from a machine after musicians went on strike. It is said that when they looked into the empty orchestra pit there were no musicians yet music was playing. Hence, kara okesutura (the empty orchestra) -karaoke for short.

This explains how the term arose but karaoke, as an entertainment form, is attributed to the improvisation of one Japanese man at the end of the 1960s.  Daisuke Inoue was born in Japan in 1940.  He worked in cafes as a penniless struggling musician until the day a businessman asked for a favor. From this meeting, a new craze was born that took the world, particularly southeast Asia, by storm. The businessman, anticipating having to sing at a social gathering with business clients, asked Daisuke to record a selection of his song tracks on an open reel tape recorder in keys that made it easy for the businessman to sing to. The latter, over the moon by the success of this, asked Daisuke to record more songs. 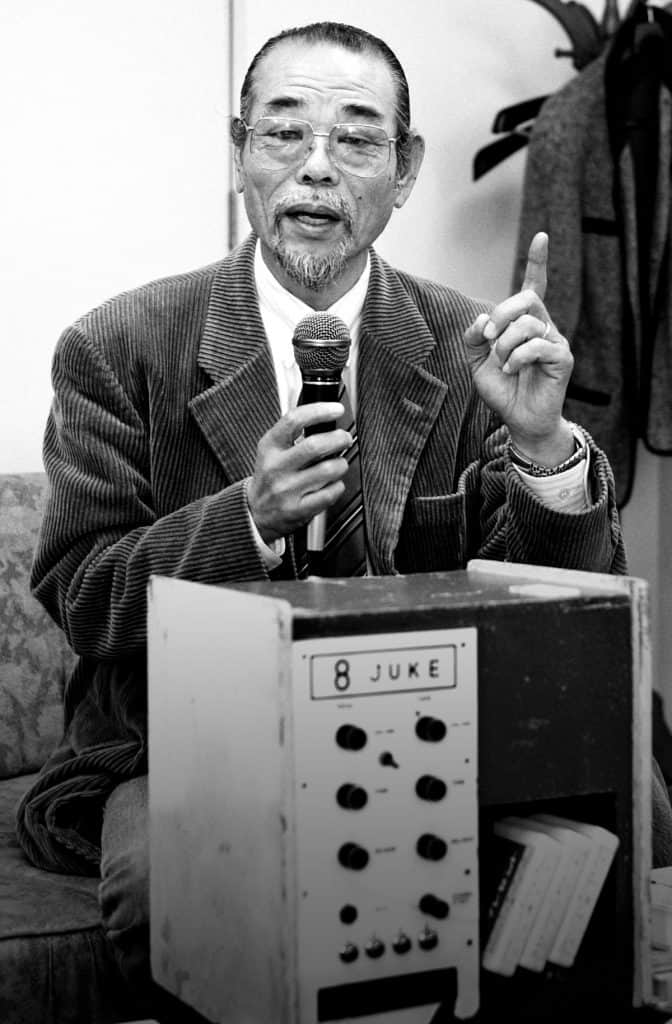 Daisuke Inoue, known as inventor of karaoke, displays the world’s first karaoke machine “8 JUKE” and its music cartridge at his office in Nishinomiya city near Osaka, western Japan 09 November 2004. Inoue would be a billionaire now only if he had filed for a patent for the device he invented three decades ago, karaoke machines on which music lovers spend 7.5 billion dollars a year in Japan alone. AFP PHOTO/Yoshikazu TSUNO / AFP PHOTO / YOSHIKAZU TSUNO

Thereby, the seed of an idea was sown.  At the end of the 1960s Daisuke, and tech savvy friends, invented the Juke 8, the very first karaoke machine.  It had a microphone, speaker, amplifier and eight-track car stereo, operated by inserting money into a coin box.  People selected recorded instrumental music to sing along to.  In total, Daisuke’s company made about 25,000 Juke 8 machines, the first came on the market in 1971. The invention proved a novel experience. It changed live music and was particularly favored by rich businessmen. Astoundingly, however, Daisuke never patented his invention, which left the door wide open for rivals to enter the market, who copied his idea.  Faced with rising competition and sound technology advancement, Daisuke could not compete. When laser disc technology came out, allowing users to see visuals and lyrics on a video monitor, his company conceded defeat.

Since the 1970s Karaoke has been uniting people of all ages to sing, dance and have a good time, and none more so than in Vietnam where it has been all the rage since the mid-1990s.

The Vietnamese take their singing very seriously.  In the 1980s when karaoke first appeared in Vietnam, audio equipment was poor in quality and rooms were dingy and cramped.  However, the karaoke craze spread when it became possible to manufacture empty vocal track media with superimposed words in Vietnamese; by the mid-1990s, it had become extremely popular, especially in Saigon. Towards the end of the 1990s, Vietnam TV began airing programmes teaching karaoke and western songs and there was an excitement bubbling around this new form of entertainment. Karaoke boxes as they are known, (venues with many rooms housing karaoke equipment booked for a certain duration) started springing up all over the place. Nowadays, of course, one cannot walk down a street in any city, town or village without passing a karaoke establishment, whether in five star hotels, tiny bars, cafes, bespoke karaoke clubs or even the mobile street karaoke buskers. A study conducted in Saigon in 2015 showed it was the main form of social entertainment for groups of friends belting out their favorite songs for 2-3 hours at a time.

In the conventional karaoke box, one books a room with seating against the walls facing the monitor at one end.  Chunky folders of lyrics are passed around containing random selections of a multitude of Vietnamese and some famous, and not so famous, Western songs. Lyrics on screen are framed against images of rivers, waterfalls and Vietnamese landscape. With prices averaging 100,000 VND to 120,000 VND per hour depending on the room, karaoke hire is cheap but drinks and snacks bump up the price.

Apart from the entertainment aspect, karaoke contributes to English language learning; singing along to English lyrics is a fun, engaging and interactive way to read and speak English.

Karaoke unites the young and old, traditional and modern, east and west and demonstrates how music can bring people closer together.

One final thought. What happened to the man who invented an industry, now worth an annual US $10 billion?  The inspiration behind karaoke may have lost a commercial fortune and fame, but in 2004, he was awarded the Ig Nobel Prize, which rewards unusual inventions. He was not upset by how things turned out, and he subsequently went on to invent a cockroach-killing machine!