THE GOLDEN FACE OF SAPA

In 2013, at the age of 27, Tuan Le invented the Sapa Cocktail for the third round of the 2013 Diageo World Class Bartender competition held in Ho Chi Minh City (the final of which was in Bangkok). The cocktail is the visual interpretation of what Sapa means to Tuan – complete with iconic symbols such as Sapa’s water irrigation system, ingredients found in Sapa and the thick mountain clouds.

Six years later, and now GM of La Siesta Premium Cau Go, Tuan has taken his signature cocktail, which remains close to his heart, one step further by creating a more luxurious version. The Golden Sapa cocktail lives up to its gilded, themed name as one of the most premium cocktails in Hanoi. This 2019 adaptation of the 2013 original is currently only available at La Siesta Premium Cau Go and is believed to be the most expensive cocktail in Hanoi.

So what makes this golden creation so memorable and a class above its ‘parent’?

Golden Sapa incorporates the same ingredients as the Sapa cocktail but using more premium varieties. Zacapa XO 25, Sampan Rhum distilled in Quang Nam province, apricot liqueur from Sapa, homemade Sapa syrup (star anise, honey, caraman, sugarcane juice and kumquat juice) are combined to create a golden orange drink with a sweet light taste, which is not overtly alcoholic. It is topped with a layer of smooth white cinnamon foam (made from cream, cinnamon and apricot liqueur) and sprinkled with 24 carat edible gold leaf. But this is not all, Golden Sapa is accompanied by an S-shaped cake. The S represents both Sapa and the outline of Vietnam and the ingredients include apricot liqueur and white chocolate covered in 24 carat edible gold leaf. 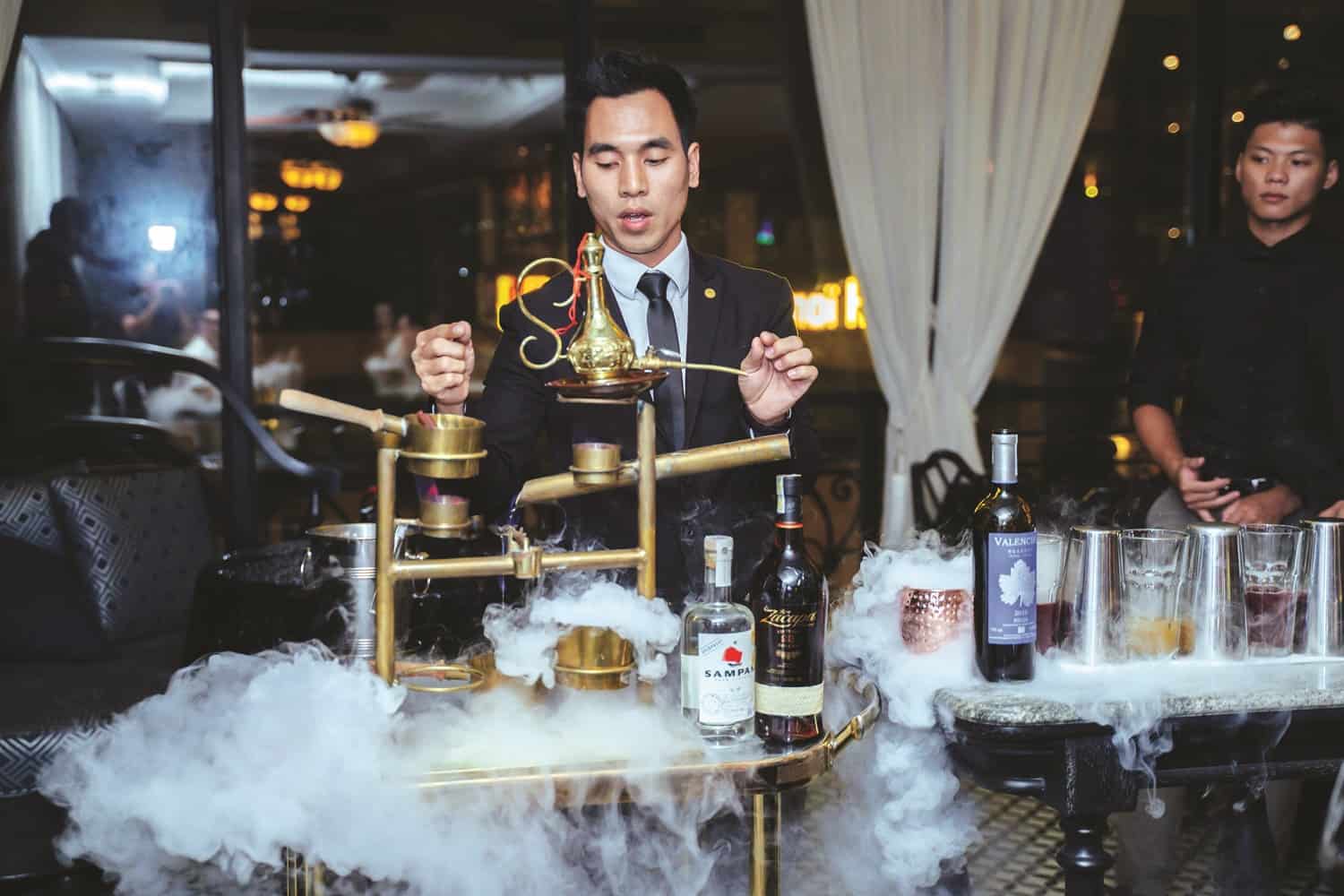 Golden Sapa, as well as Sapa cocktail, cannot be made without a vital piece of equipment which hints at Sapa’s bamboo water irrigation system. Tuan calls it the Sapa Tree – a cleverly constructed series of ‘pipes’ and balancing levers allowing the cocktail liquid to be heated and trickle along the seesawing pipes. The effect is then enveloped in dry ice representing the mountain clouds of Sapa. He designed this on paper and then found a bronze casting artisan in Hanoi’s Old Quarter to make it. The Sapa Tree went through four construction updates before Tuan was happy with the final result. Anh Son, now 46-years old, is the artisan with the pavement as his workshop, who patiently and with good humour worked with Tuan to perfect this mechanism. Why out of all the artisans in the Old Quarter and neighboring districts was Anh Son chosen? Tuan says he was struck by his friendliness and ready smile. Anh Son has since made another eight Sapa Trees. Tuan’s Sapa cocktails are only available at bars where he has worked and/or been associated with.

As to whether Anh Son has seen the Sapa Tree in action Tuan explains he has invited him to some of the bars in the past to show him the success of his masterpiece and to have a Sapa cocktail or two. As one can imagine Anh Son is immensely proud and no doubt will be looking forward to sampling the Golden Sapa in the future.