Hanoi, 15th April 2019 – Elegance Hospitality Group (EHG) one of Hanoi’s leading luxury boutique hotel groups announced the opening of its newest restaurant in Hanoi. Cloud Nine is aptly named not just for its 9th floor location within La Siesta Premium Hang Be but also because of its wow factor through a heavenly menu and dazzling views. EHG, through its La Siesta brand, has been a major player on Hanoi’s restaurant scene ever since opening its chain of Red Bean restaurants in 2014. Cloud Nine is the group’s sixth and latest stand-alone restaurant venture taking diners on an experience through food and is set to become one of the capital’s best ‘sky high’ dining destinations. 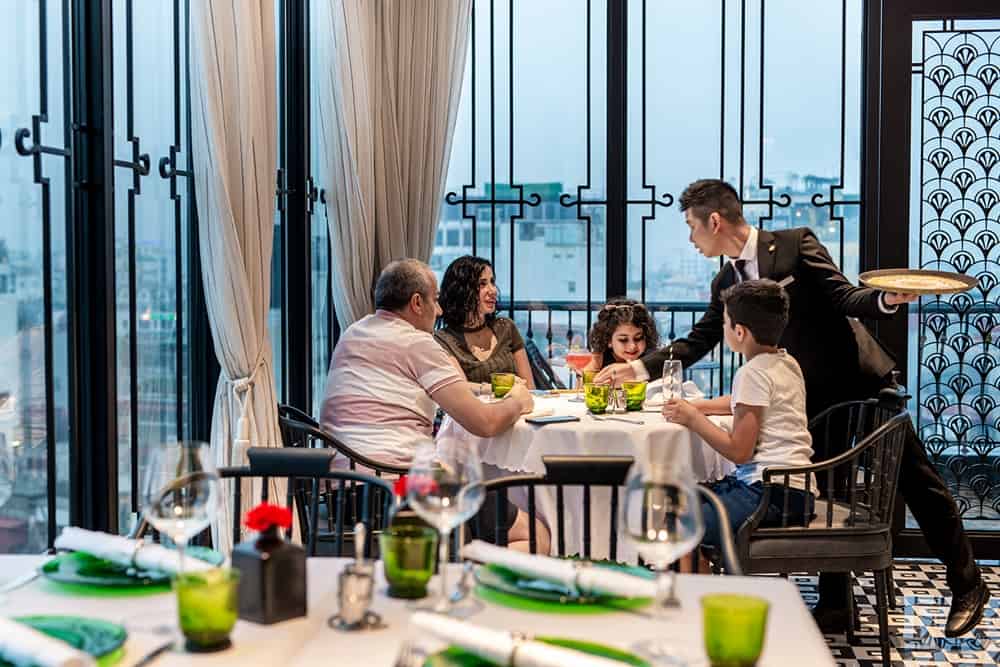 Mr Do Van Dan, EHG’s Chairman said, “we are very excited to introduce our customers to Cloud Nine. EHG never stands still and we work creatively hard to bring something new to the hospitality table. We recognize that people want not just great food but to savor the entire dining experience. Through Cloud Nine we know we are taking diners on a creative adventure”.

2019 is a year of considered expansion and new offerings for EHG. Cloud Nine is located within EHG’s newest hotel – La Siesta Premium Hang Be a stone’s throw from Hoan Kiem Lake and bordering Hanoi’s Old Quarter.  The rationale for the restaurant’s name is clearly evident. To be on Cloud 9 means being in a blissful state of happiness and Mr Dan and his team are confident that the Cloud Nine dining experience will inspire customers to feel in seventh heaven and extremely impressed.

This 9th floor space is encased in walls of floor to ceiling windows giving 360 degree views across Hanoi’s rooftops, Hoan Kiem Lake, the Old Quarter and the Red River. The effect is one of breathtaking beauty. Cloud Nine is flooded with light and has a feeling of openness where the concept of seeing the outside world is just as important as what is within.

The restaurant and bar area are classically styled calling to mind an Indochina area. A color palette of black, white, creams and blue-greys partners with geometric shapes of striped furnishings and square patterned floor tiles. The expanse of windows is creatively broken up by a series of iconic photos and pictures suspended against the glass, while floor to ceiling drapes soften the environment.

Mouthwatering menus feature the very best in authentic flavorful Vietnamese cuisine showcasing some of the most iconic dishes from the north as well as central and southern areas. From quintessential spring rolls, melt in the mouth cha ca and fragrant pho bo (beef noodle soup), to succulent grilled beef in bamboo and bun cha, one of Hanoi’s most famous dishes. Equal attention is given to international fare with a selection of favorite western dishes such as Australian Beef Tenderloin, Norwegian Salmon and popular pasta options. Creatively presented, authentically cooked and technically exquisite, Cloud Nine takes the diner on a culinary journey through food.

No one knows for sure how the term Cloud Nine came about. However, one of the most popular attributes it to the fluffy white cumulonimbus. This is the nineth cloud out of ten types first identified in the 1896 International Cloud Atlas which rises as high as a cloud can go, hence the sense of being ‘on top of the world’.

One thing is certain however that dining at Cloud Nine is an elevated experience in every sense of the word. Superior service and divine cuisine in a setting high above Hanoi’s rooftops is an experience hard to beat.