One of the most iconic and recognisable symbols of Hoi An is the majestic Japanese covered bridge. The 16th century construction arches over a small inlet from the Thu Bon river, linking Tran Phu and Nguyen Thi Minh Khai streets. 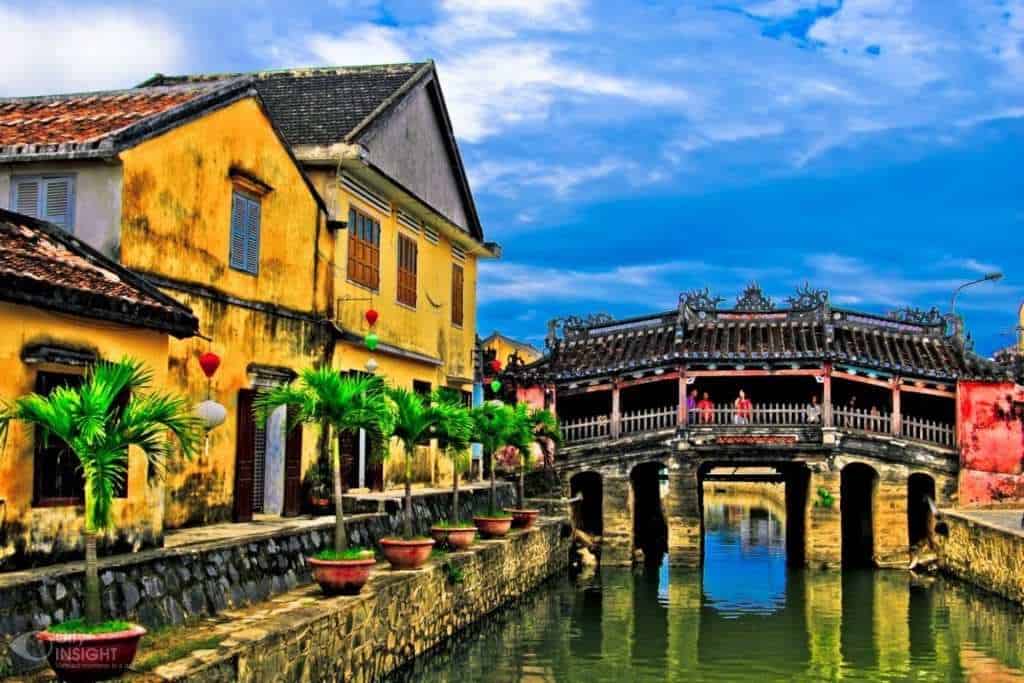 Tucked into the old town amidst its timber framed houses, the bridge is a large draw for many tourists. It is believed that it was originally built to link the Japanese and Chinese neighbourhoods of the melting pot port town.

In the 16th and 17th centuries, Japanese merchants had a large presence in Southeast Asia and held considerable influence in port towns, such as Hoi An. Chinese immigration, which first began in the mid-1500’s, also resulted in a sizable population of Chinese residents in the town.

A more colourful legend describes the construction of the bridge as an attempt to deter the demon Mamazu, who was believed to cause earthquakes and other natural disasters. According to the myth, its head lays in India, its back in Vietnam, and its tail in Japan.

Known as Lai Vien Kieu in Vietnamese, the 18-metre bridge is an impressive example of Japanese architecture.

Although the builder of the bridge has remained unknown, certain Japanese elements are present in the structure, such as the majestic dog and monkey sculptures which bookend the bridge. These intricate statues perhaps represent the zodiac symbols of the years of commencement and completion of the bridge, or could signify the auspicious astrological signs of many Japanese emperors.

Tablets engraved with Chinese characters honour Chinese and Vietnamese contributors to the bridge’s many renovations. The bridge has been restored four times since its original construction. During the French occupation, the structure was flattened in order to accommodate motor vehicles, but the original arch was restored during renovations in 1986.
While the bridge itself is free to cross, you can purchase a ticket (120,000 VND) in order to step inside the Cau Nhat Ban temple housed inside the bridge. Dedicated to the northern weather god Tran Vo Bac De, it was built to honour the god and help protect the city of Hoi An from floods.

This ticket also gets you entrance into other Hoi An antiquities, such as the Guan Yu temple, or museums such as the Hoi An Folklore Museum.

Vietnamese residents of Hoi An will often come to make offerings and burn incense at the temple on the 1st and 15th of each lunar month to pray for the god’s protection from storms and floods.
A sight to remember

On the other side of the bridge, it becomes quieter as fewer tourists venture to the Nguyen Thi Minh Khai side. You can stop for a quiet glass of wine, a cold coconut, or to look at the many colourful paintings that hang in the many galleries.

At night, the bridge is lit up and becomes a wonderful backdrop for photos to remember time spent in the beautiful heritage site. During the full moon, the old town is closed to traffic and electricity is shut off, leaving the streets lit by lantern light.