The traditional Folk Art of Dong Ho Folk Paintings is centuries old. It originated in Dong Ho Village, Bac Ninh Province, 35km from Hanoi, where it can still be seen today.

Years ago, Dong Ho paintings were a much-treasured decoration, which Vietnamese people purchased to hang on their walls to mark the Tet (the Lunar New Year), and replaced them at the start of the following New Year. The art became symbolic of folk culture in Vietnam and a source of inspiration for poets and musicians. 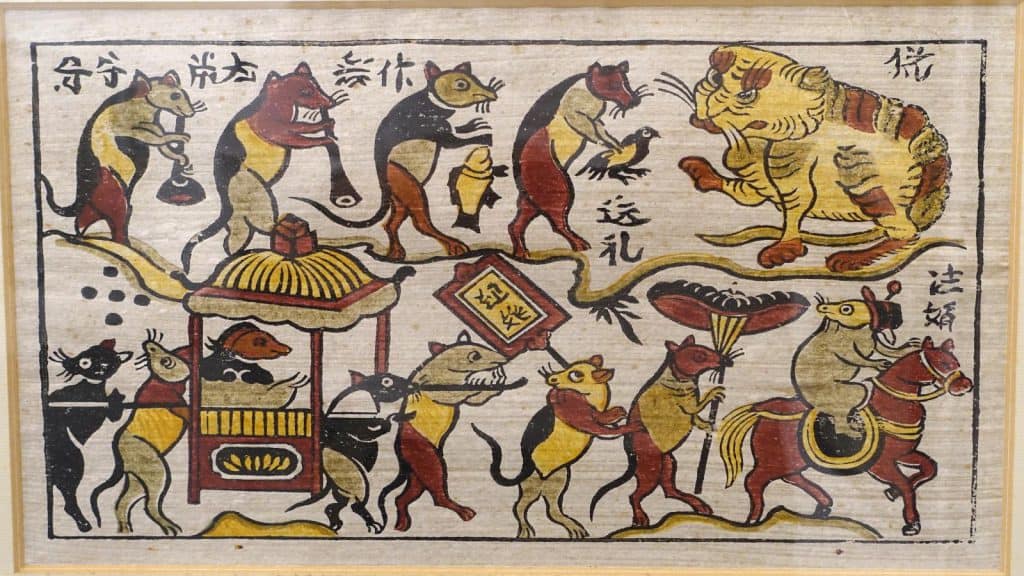 Dong Ho painting or Dong Ho woodcut painting is a genre of Vietnamese folk painting. Both the paint and paper used are made by hand from materials found in nature, readily available in Vietnamese villages. The paper is made from the bark of the Do tree, which is soaked in water for several months then mixed with powdered seashells and glutinous rice. The seashells make a sparkling white background whilst the glutinous rice makes the paper more supple and able to hold color longer. The paintings were originally only in black and white but from the 15th Century, colors were introduced.

Of the woodcuts, one is for the outline, several others are for each printed color, and they are carefully engraved by hand so that they last for generations. The paint colors are extracted from natural materials such as black from ash of burned bamboo leaves, red is from red gravel, yellow from flowers. The last stage of making a Dong Ho painting is the printing.  The woodcut is covered with paint and pressed onto a sheet of paper like a stamp. The artisan repeats this process until he is satisfied. The finished picture is covered with a layer of rice paste to strengthen the durability of the illustration and then dried in the sun.

Spirit – the twelve signs of the Chinese Zodiac.

Good luck wishes – a large pig with suckling piglets or a hen surrounded by chickens.

Folk tales and popular stories – a Confucian scholar in the form of a toad, or a rat’s wedding.

Social activities and commentary – a scene depicting jealousy or catching coconuts; a wrestling match; a boy sitting on a buffalo playing a flute. 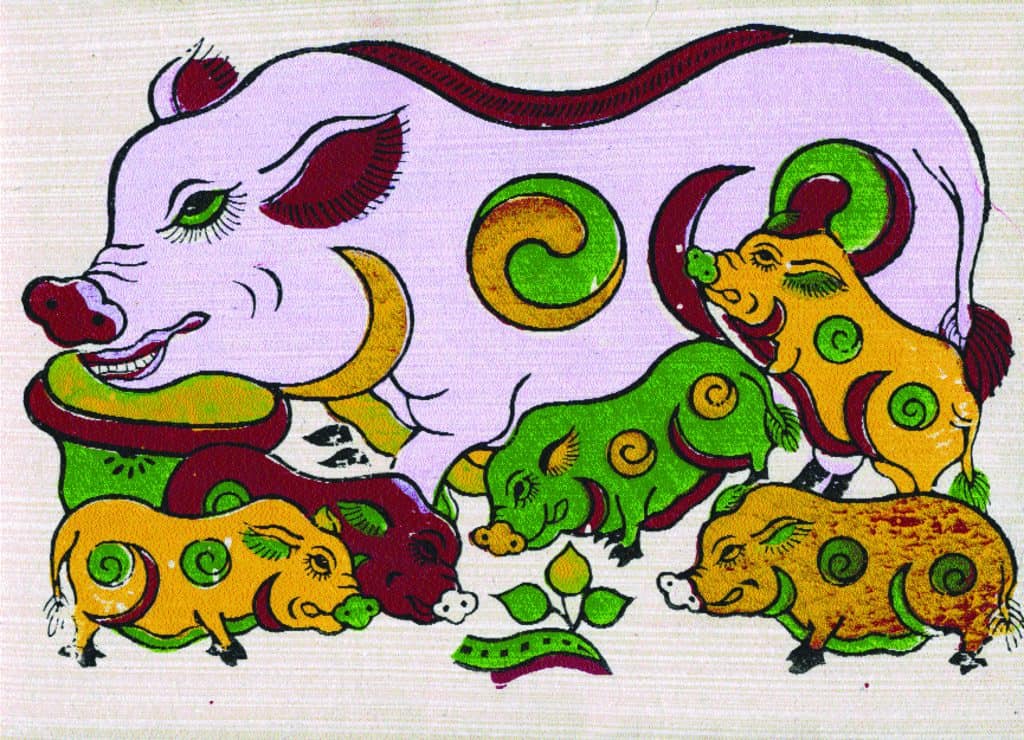 Some of the pictures are more popular than others, such as those representing the wish for prosperity and happiness in the New Year. Because they are associated with Tet, the subjects are optimistic and painted in bright colors.

The paintings also include script to describe the meaning. Sometimes the Dong Ho paintings are shown as a couplet or a quartet to emphasize their meaning. Dong Ho paintings are used as a social medium to express the artisan’s concerns through subtle social, political and cultural criticism.   For example, before World War 1 the villagers produced a set of prints entitled “The Progress of Civilization” in which Vietnamese society was gently criticized through the portrayal of Vietnamese people dressing and behaving like the French. Some paintings became famous for their interesting themes, like the Rat’s Wedding, which features a wedding march of rats with the rat bride and groom and rat guests delivering gifts to a big cat, in the hope that the cat will leave the happy couple alone.

At one time almost all the Dong Ho villagers were involved in producing the paintings – before 1945, over 150 families were making the pictures. Sadly, nowadays the art is losing popularity amongst Vietnamese. Mainly tourists buy the paintings now and only two families in the village continue the traditional handicraft whilst other inhabitants have switched to making votive objects. There is also the threat from mass-produced machine-made pictures.

Efforts are now being made to preserve this art.  Nguyen Dang Che, one of the few remaining artisans in the village, established the Dong Ho Painting Center in 2008.  This makes for an interesting trip to Dong Ho village where one can meet the artisans to learn about the paintings and the difficulties they face as they try keep this tradition alive in modern times.