A new year, a new beginning

Governed by tradition, taboos and legends, Tet Nguyen Dan (Tet) welcomes the Lunar New Year and spring’s arrival.  It is Vietnam’s most important festival and public holiday.  The lunar and solar calendars are linked in Vietnam.  The former dictates the observance of festivals and rituals according to cycles of the moon. Hence, Tet dates are not fixed. The New Year starts on the first night of the first moon of the first month of the lunar calendar.

Also known as The ‘Feast of the First Morning of the First Day’, it is when the new and good replace old and bad elements.  People turn one year older as traditionally the New Year determines one’s age. Custom dictates actions and thoughts at the start of the lunar New Year influence one’s fate and prosperity for the coming 12 months.  Also high on the agenda are family reunions and paying respect to the ancestors. 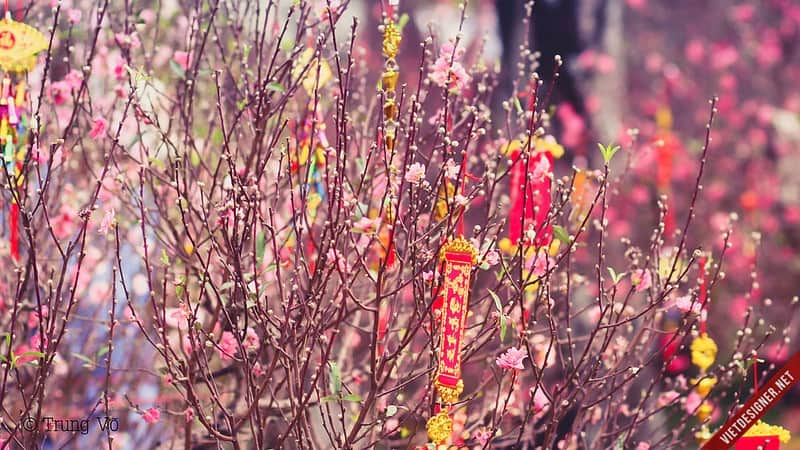 An Tet literally means “to eat Tet” and food plays a central role in the celebrations.  Dishes synonymous with Tet include Banh Chung and Banh Day. Compact savory “cakes” of sticky rice filled with beans and meat, wrapped in dong or banana leaves.  They are named after a famous Vietnamese legend honoring the son of King Hung Vuong VI who conjured up square and round sticky rice “cakes”. Banh Chung is square representing the earth while the round Banh Day symbolizes the sky.  Other traditional dishes include Xoi Gac – sticky rice with “gac” fruit. This is an auspicious red colored dish symbolizing luck and achievement. Boiled chicken, eaten with sticky rice and Banh Chung, is another popular dish attributed to the ancestors. Such food features in a family’s lunar New Year’s Day feast, accompanied by ceremonial words to honor the ancestors. 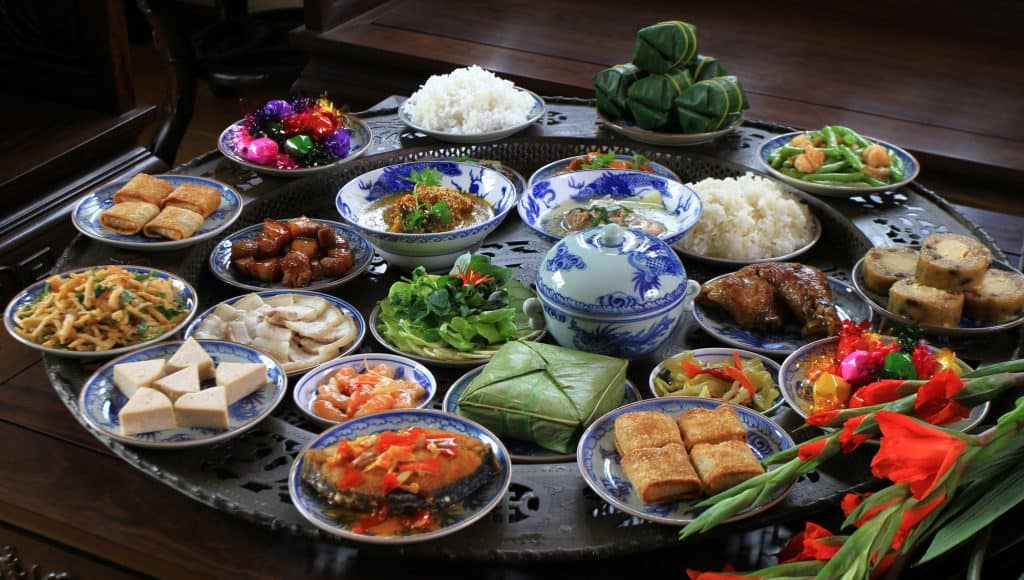 Preparations start early.  People honor their ancestors and make offerings at family altars.  Homes are cleaned and decorated with colorful flowers.  Kitchens are stocked with food. Debts settled.  New clothes purchased. Streets adorned with lights, flowers and festive red ‘Chuc Mung Nam Moi” happy New Year banners. Legend says each home has three kitchen gods overseeing the household’s affairs. On the 23rd day of the 12th lunar month, each kitchen god (On Tao) returns to the Jade Emperor on a carp fish. He delivers his annual report on the family, returning on New Year’s Eve.  People clean their houses and offer sacrifices in order to aid the god’s journey and ensure a good report.

New Year’s Day is reserved for families, the second day for friends and traditionally the third for teachers.  Elders and children receive lucky money in red envelopes and households observe the custom of ‘xong dat’ or ‘xong nha’.  Vietnamese people believe that the first person to visit one’s home on New Year’s Day dictates the coming year’s fortunes.  Therefore, this individual should be successful with a good character and moral values.

Tet is infused with numerous traditions, taboos and greetings. Families and friends greet one another with auspicious words and phrases such as Chuc Mung Nam Moi (happy New Year), Suc Khoe Doi Dao (may you have plenty of health), Tien Vo Nhu Nuoc (may money flow like water).

A Five Fruit Tray (Mam Ngu Qua) is placed on the ancestral altar symbolizing a family’s wishes and gratitude to Heaven and Earth. Regions vary in their arrangements and choice of fruit depending on colors and connotation of the sound of the word.

Red and yellow colors are everywhere, symbolizing good fortune, prosperity and happiness while flowers abound. The streets and homes of North Vietnam are decorated with peach blossom, while the south prefers apricot flowers. Each household displays two trees. A kumquat tree with orange fruit representing fertility and abundance for the coming year and a decorated artificial bamboo pole-tree (cay neu).

In the run up to Tet, cities and towns are awash with color and pre-celebration activities.  Lion dances and parades, a cacophony of beating drums, bells and gongs ward off evil spirits and New Year Eve firework displays light up the night skies.

Tet is everything to all people. A celebration of the union of nature, humankind, traditions, culture, the living and the dead.