‘Green Friday’, held on the last Friday of every month, sees around 100 members of EHG’s Hanoi hotels come together in a sea of green clearing rubbish.  This initiative, which started in September, stems from the group’s first participation in World Environment Day on 2 June 2019. On that day, one team focused on cleaning up Sam Sam beach in Thanh Hoa Province while another cycled round Hoi An to promote environmental protection.

Dressed in vibrant green polo shirts, the team ‘sweeps’ around Hoan Kiem Lake and streets surrounding the hotels in the group, armed with garbage sacks, rubbish pickers and protective gloves.

Litterbugs continually drop empty bottles, bags, waste paper, receipts, cigarette butts, sweep wrappers, food remains, and the like, along pavements, in flower beds, on grass verges, tree roots and around the lake side which continues to blight the landscape in the heart of Hanoi.

At the end of September 20kg of rubbish were cleared while the quantity rose to 30kg in October. The team, led by the group’s Chairman and hotel GMs, report that the most common items cleared include nylon bags, plastic bottles, cans and disposable food containers.  EHG responsibly informs the Natural Resources & Environment Department of Hoan Kiem District about its clearance plans. The rubbish is collected into compostable bags and put into the large public rubbish containers.

Through this work EHG, along with many other community-inspired environmental protection groups, wants to change public behavior, raise awareness and strive for a cleaner, greener healthier environment. 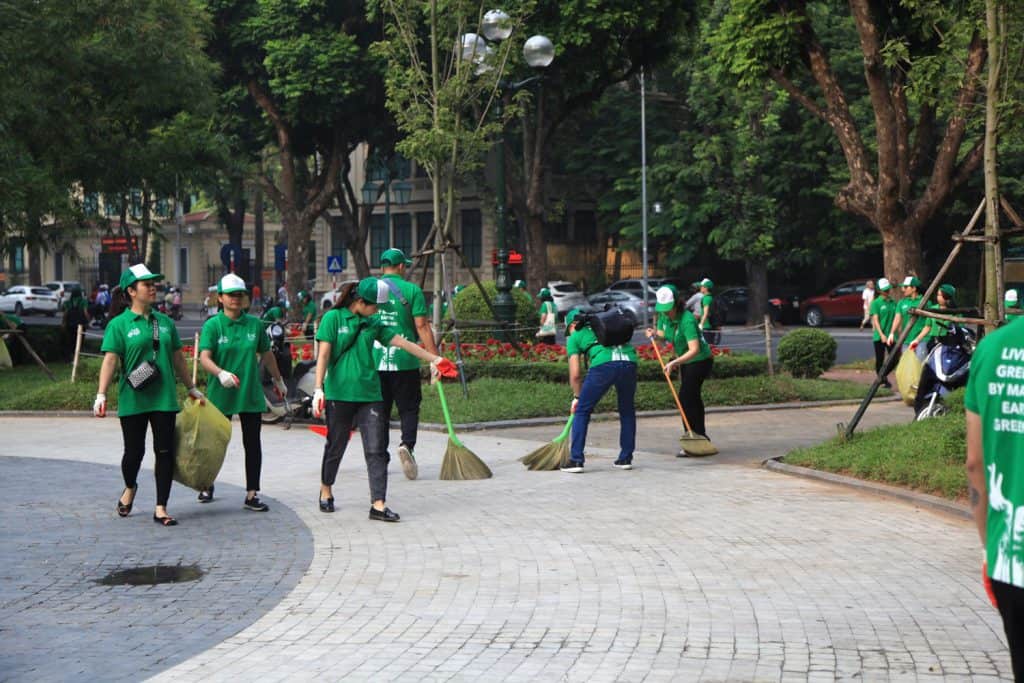 Currently, they work as an independent group but the intention of EHG Chairman Mr Do Van Dan is also to inspire other companies and organizations, particularly in the hospitality industry, to follow EHG’s example.  Ms Kim, EHG’s La Spa Director, likens this to the African proverb “If you want to go fast, go alone. If you want to go far, go together”.

The fact that 50 year-old Hanoi Urban Environment Company (URENCO) alone collects 200 tons of garbage every day from the pedestrian-only areas in the center of Hanoi, shows the enormity of the rubbish clearing work to be done and the ongoing need to change the public’s mindset. The initiatives being spearheaded by EHG show how important it is for the community to play its part.

Each business can make a difference no matter how big or small and EHG hopes to motivate others to Go Green.