The art of Vietnamese water puppetry

One of the most popular tourist attractions in Hanoi is the iconic Water Puppets Show, or Mua Roi Nuoc in Vietnamese, meaning, “making puppets dance on water“.

The tradition of water puppetry dates back to the 11th Century originating in the villages of the Red River Delta in Northern Vietnam. When the rice fields flooded, the villagers would entertain each other using this form of puppet play. Original water puppet festivals were those literally held inside a rice paddy, with a pagoda built on top to hide the puppeteers, who stand waist deep in water. 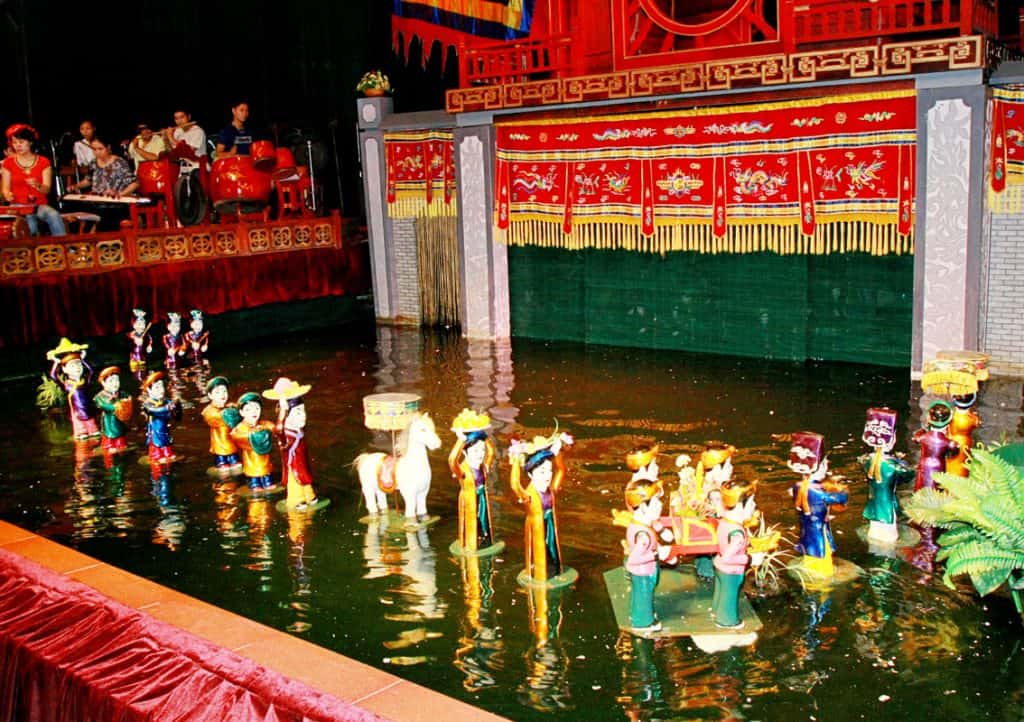 The water serves a dual purpose – it is the puppets’ stage whilst and a symbolic link to the rice harvest. It also hides the puppet operational equipment and puppeteer movements, enhances the acoustics and provides a shimmering lightening effect. Nowadays water puppet performances tend to be help in one of three venues – on village ponds, on portable tanks built for travelling performances or, as in Hanoi and major cities, in specialized water puppet theaters with specially constructed pool stages.

Puppets are carved from fig wood, the most endurable and suitable material and each can weigh up to 15kg. There are five main stages of construction. After being carved, any cracks are filled with lacquer. Then the artist covers them with nets for protection. Next, a mixture of Vietnamese lacquer and alluvium from the Red River is applied to the puppets. This stage is similar to plastering, which gives the puppets a waterproof surface. Next, artisans polish the surface and apply a black lacquer coating. Once dry the puppets are painted in a variety of colors forming their faces, figures and clothes.

Puppet makers must be good at designing and carving plus with a good knowledge of the complicated movements of water puppets. When creating a new water puppet the artisan must think of the movements and the operation mechanism involved. If used on a daily basis the average life span of a water puppet is four months, meaning some villages in Northern Vietnam are able a maintain their income and livelihoods solely by manufacturing water puppets.

The puppets are hollow inside with a detachable back.  The internal apparatus connects the puppet’s limbs to strings, allowing different parts to be moved and manipulated. A large bamboo rod supports the puppets underwater, which is the puppeteers’ control mechanism. Thus, the puppets appear to be moving over the water. The puppet is controlled via strong thin string attached inside, running through loops on the side of the rod to reach the puppeteer’s hand. Alternatively, the puppet’s base may be directly attached to a rod accompanied with a paddle. The paddle will rotate when the base moves, making the puppet spin around or in a certain direction, depending on whether a rudder is installed. It requires strenuous effort to control the puppets but with skillful manipulation, they can swim, catch fish, cross swords, row a boat, raise a flock of ducks, dance, jump, spurt fire and kick a ball. Today the water puppets have been significantly updated with new techniques making it easier to construct and control, creating better effects.

Each water puppet show involves 7-11 puppeteers.  They train for at least three years and in the past, the skill was passed from father to son. They stand behind a split-bamboo screen, decorated to resemble a temple facade from where they manipulate the puppets on their bamboo rods. Some of the dances, such as the lion and phoenix, are very energy consuming and require great practice and skill. The movements have to match the up-tempo music and vividly resemble a lion and phoenix. Music is an integral part of the show with the instrumentalists often shouting words of encouragement to the puppets. The orchestra consists of traditional Vietnamese instruments, with the bamboo flute’s clear, simple notes accompanying royalty, while drums and cymbals may announce a fire-eating dragon. Performances feature traditional legends and folklore while nowadays the art is also used to impart social and environmental messages.

Water Puppet shows are held in Hoi An, Hue and Ho Chi Minh as well as Dong Cac in Thai Binh Province – the home of Water Puppetry with 127 puppets and village shows held at Tet, the mid-autumn festival and at harvest. In Hanoi the Thang Long Water Puppet Theater is at 57B Dinh Tien Hoang Street, next to Hoan Kiem Lake in the Old Quarter. Shows are held daily from 15.30 – 21.15 or 21.30 on Sunday and are charming, curious and enchanting, well worth a visit.